Skip to main content
Riders Registration
Photo Credit : The Agency
Last weekend, Reims hosted a stop of FISE Xperience. Eight years after its launch, the festival has become a go-to event. Every year it gets bigger and bigger, with increasing numbers of competitors aiming for the podium top spot.

What happened over the weekend?

For those of you who missed it, here’s all the news about the Reims festival.
First up, the finals of BMX Freestyle Park took place in the René Thys sports hall – where the atmosphere was like that found at football matches.
The people of Reims were busy urging their compatriots to surpass themselves, take their place amongst the English, and dethrone Cam Peake who’d been first to qualify the day before.
For the women, Laury Perez gave her all and snatched victory from Argentinian Nazarena Perez who had been unbeaten since the start of the season. Huge suspense! Among the amateurs it was local Valentin Mancier, in second place the previous day, who took victory in front of his home crowd.
watch the REPLAY

In Roller, it was a really tight contest between Englishman Joe Atkinson and the French Romain Godenaire.  Their main challenger, Nicolas Servy – whose rotations dazzled the crowd – was not far behind in what was an incredible final.  Among the amateurs, Reunionese Valentin Rivasseau stole the show from Parisians Alex Françon and Jonathan Bibi.
Heading for the bowl, repainted for the festival and for the delight of skateboarders especially locals Pierre Lucas and Victor Tual. Even if they know their spot inside-out, it was the youngest competitor Noah Cohen who retained first place with a huge flip rock transfer on the spine. For the pros, Samuel Geoni stayed on top with a run that was all speed and amplitude in an individual style great to see in Bowl. With his series of technical tricks, Paul Gallelli came second, ahead of Anthony Smeyers who competed with originality and a double air walk passing the spine, where there was no one waiting for him.

BMX Flat – newly included in the FISE Xperience Reims programme –  proved yet again its capacity to electrify the crowds by the riders’ demonstrations of creativity and balance. On this second stage of the French Cup, the women had to go to their limits to bring off their best run. Even if Céline Vaes hasn’t yet a year of practise under her belt, it’s her hard work coupled with a prodigious talent that propelled her to podium top spot. Of particular note in the amateurs was the beautiful performance of Gregory Gonzalez from Epernay who took third place. Local man Raphael Chiquet improved yesterday’s run and clambered onto the second podium step behind an untouchable Kevin Jabob.

Anxious to renew the festival every year, Reims City Hall chose to introduce lots of new features for the 8th edition programme.  And the success of the event with fellow citizens confirms that the gamble paid off as much for the spectators as the riders, who took great pleasure from the stop. The French tour of extreme sports continues towards its next stop in  Anglet, then on to Le Havre and the Grau du Roi to finish the season.
Take a quick look to see if the tour is coming anywhere near you and come along and join in the Festival atmosphere!
All results
Related event 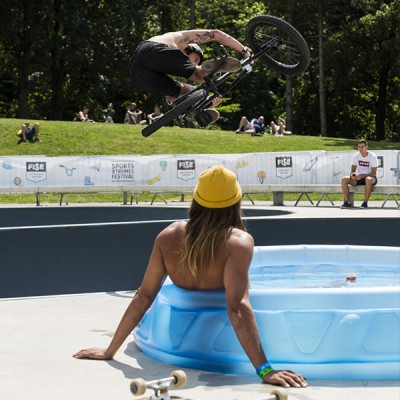