Skip to main content
Riders Registration
13:30 – Live Semi-Final !
Here comes the most anticipated moment of the weekend! With rain predicted for tomorrow’s final, our riders need to go all out as this could count for the overall ranking ! The riders have this in the forefront of their minds and this should give us some incredible runs!
14:00 – Group 2 : Disappointment for Baldock
– Kenneth Tancre has a flawless first run with a rad 36 double whip onto the island which gives him a well-deserved 77.8 points but he seems to be limited by his endurance.  The young Rim Nakamura (japan) has no trouble with endurance and multiplies his tricks, he leaves not one section of the park untouched and pulls off multiple combinations with ease with a 36 whip  he secures a lovely score of 82.40 pts which puts him in second behind Marin Rantes.
– From the same generation as Nakamura the American Justin Dowell messes up his first run and decides to go all out for his second run in which he does not disappoint! With tricks that no one has displayed yet (flair turndow, 36 triple bar) without mentioning his signature very rare Twix. With certain areas of the park left untouched he didn’t score as highly as he would have liked too with 82 points, he is now in third for now…
–  Finally, all eyes are on the living legend Kyle Baldock, multiple time winner of the Xgames in the dirt bike.  The Australian has a great start on his first run pulling out many combos such as a 720 whip followed immediately by a flip whip to bar. Unfortunately, an error 2 seconds away from the buzzer on a anodin alley oop flair means he loses at least ten points. His second run sees his foot slip from his pedal and means there is no chance of him doing better than 77 points. What a disappointment for one of the most talented riders of his generation.
14:30 – Group 3 : The wind gets stronger and so does Irek Risaev
Despite the strong winds, the rise in humidity and the threat of rain in the afternoon, the riders continue to put on an amazing show in front of an enthusiastic audience!
The stakes are high with the threat of tomorrow’s final being cancelled being very high!  Even though Bondu pulled off an amazing 360 windshield wiper, he could not pull off a complete run. The Brazilian André Luiz de Souza confirms that he will need to look to the southern American in the future but he won’t mess with the top places unlike Alex Coleborn and Irek Risaev. The Englishman contents himself with 81.4 points due to a foot touching the floor on a 36 triple whip. He will be disappointed has his footiam on the wall sent the crowds crazy. The Russian Risaev has a flawless run with no faults as he battles against the wind in order to keep his speed. He opens his arsenal of whips such as a tuck no hander to finish his run. He scores a very high score of 86.30 even with his high level of fatigue. However, he stays behind Rantes in the ranking.
14:50 – Group 4: Daniel Sandoval in good form
For now, the weather is holding and the riders and battling for the best place possible. The Montpellier crowd wait dearly for their local hero Anthony Jeanjan. Jeanjan himself seems very motivated but he faults on both runs which rules him out of appearing in the hypothetical final. Jake Leiva on the other hand, owns his runs and qualifies with ease with very fast lines and transfers which unfortunately did not contain any tricks. His triple whip on the very challenging island allows him to score an incredible 83.5 points and puts him in 3rd place for a short second. Daniel Sandoval flies past Leiva with an elegant run and reminds us all of the era in which he used to win all the contests! A perfect second run with a 540 flair double whip lands him with 84.3 points and a place on the famous podium.
17:00 –Group 5 : Brian Fox is indescribable
Brian Fox is incredible. He has just landed a crazy double flip on the transfer of the two parallel step ups. His audacity and enthusiasm has seduced the judges who give the fantastic American an incredible score of 87.20 points on his first run landing him in second place for the moment. The emotion on his face is a real sight to see, In the space of a few short years he has become one of the most charismatic riders in the sport! It would be an honour to see him in the final to try and perfect his second run where he will add a massive 1080 (with a foot on the floor) a risk that could very well pay off.
Risk is an important factor in these runs and has to be balanced with intelligence and experience. Whilst on the subject of experience Ryan Nyquist comes to mind who we have the honour of accommodating here at the FISE. Captain of the American team he unfortunately due to a puncture he must content himself with 12th place. There’s a big chance that he may not qualify for the final.
However less doubt for Daniel Dhers who does not miss the opportunity to assure a clean first run and throw in his signature tricks on all parts of the course gaining 85.10 points.
Colton Walker does the same with a clean and ferocious first run without any slip ups. Everything seems so clean and simple for the young American. He scores a little more than the Venezuelan with 85.70 points. Daniel responds straight away adding a new transfer coming out of the vert bowl, a whip for good measure gives him 85.92 and 4th place. His transfer to 36 double whip between the two step downs seems to be one of the best tricks of the competition.
REPLAY
Related event 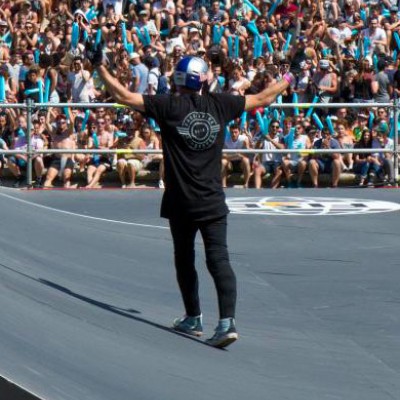 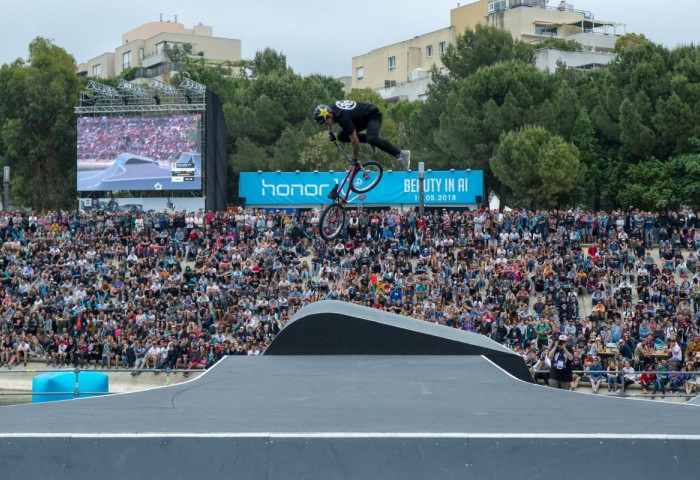