After five days of festival, running through the village, excitement on all floors, the sound system stops almost as suddenly as a fly falling in the soup; the voice of the last living MC has just invited us to come back next year. So that's it, is it over? It's going to be hard to get back to normal given what just happened. Anthony Jeanjean was 15 seconds from a historical victory. After years of work, risk, focus on every aspect, incredible progress and here is the fan favorite to compete with the best. Who would've believed that ? Himself obviously, and his trainer Guimez also to whom we must recognize the influence in the management of the young man competition. So this report of the UCI Bmx freestyle park final begins with the ultimate spoiler to look back quicker to an historic finaly.

With 9 riders within less than 6 points at the top of the ranking, we were in the very definition of suspense. With 6 riders above 90 points we can speak of excellence. So let's resume the thread of this anthology moment. Brian Fox (6th) is the first to shine with his very impressive sequence of double flips transfer and 1080. With 90.8 pts he takes the lead in the first heat where Nick Bruce (4th) misses his first run, where José Torres (10th) does not show enough variety in his 360 combos. The Argentinian does not catch up on his second run unlike Nick Bruce who kills it when he puts down his bangers: triple whip flip, transfer in 36 triple whip. With 93.3 pts he takes the lead. About variety, Kevin Peraza (9th) is perhaps the best example in bmx. He has landed today undeniably the best run of his FISE career. Each ramp is touched with grace, but also with complicated tricks like this 360 downside whip to double cancan. This minute was a gift for all bmx lovers, the perfect fusion between all types of riding. With 89 pts, he cannot claim the podium but once again he added to his myth. Another bmx freestyle shaman, Rim Nakamura transported us to another dimension with his combos to watch in slow motion to fully understand the degree of difficulty: 360 windshield wiper, 360 whip catch to whip and a mind-blowing 720 double bar. Add amplitude and a sense of serenity, and you have your new leader. 95.30 points is now the score to beat.

Marcus Christopher is the first to give it two tries. Since the beginning of the week he has proven that he can join the fight for the podium, his pedaling power and his control do not leave room for chance. Despite two flawless runs, he just lacks an extra banger or two to tickle the top of the board. He finishes 5th. Justin Dowell (7th) does not find sufficient resources in his luggage of tricks to join the madness. His 36 twix, however, remains the greatest mystery of the 21st century. We then all imagine that Logan Martin has what it takes to get back in front of the Japanese. The usual fluidity that accompanies each tricks from the Australian is there, as usual, shall we say. We enjoy the incredibly hard and risquy 720 with a barspin in each rotation but would it be the slightly hung up triple whip that prevents it from scoring higher ? With 94.50 he positioned himself 2nd before his last run of the week end which unfortunately came to an end the fault of a missed landing on the forward bike flip.

It only remains for Anthony Jeanjean to rewrite the story ! Just that. His first run had confirmed that he had it in him; triple whip flip, chained double flip after the tuck no hander transfer; there was a minute of the highest level there. With 94.20 points he knew he had to add a few degrees of difficulty to his already well-set run. It starts very well in the second run with a whip placed in the crazy transfer. If he makes no mistakes, victory is possible. The public won over to his cause crosses his fingers, his legs too… Unfortunately, you know the end. The specific cause? A triple whip just missed fifteen seconds from the end. It's hard to regret anything when you get your best result at the FISE (3rd) and when it feels he has climbed another step towards the ultimate goal: the 2024 Paris Olympics. An idea, a dream that seems more and more realistic. 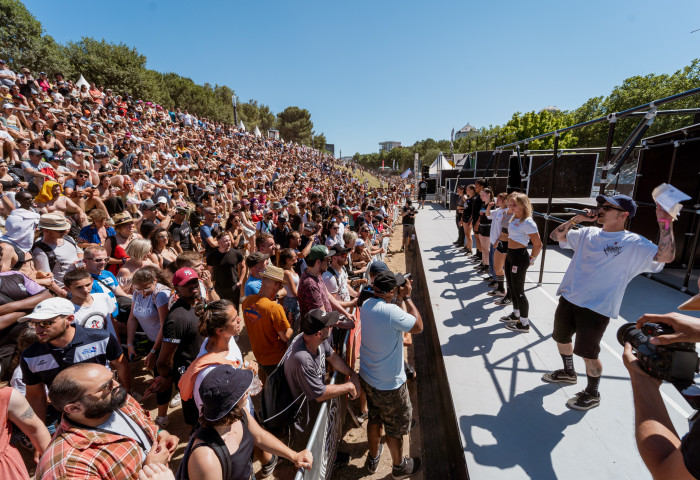