Skip to main content
Riders Registration
So we’ve had a few weeks to get our breath back… Feeling okay? Great!

The FISE World Series took Edmonton – and Canada – by storm. For those who missed it, here’s a quick recap on the event and how things are shaping up for our final stop in Chengdu.

Logan Martin – back with a bang!
95.00! Logan’s amazing score for his final run. You can put your eyes back in their sockets now – he’s on the way up and he sure means business.

After missing the Hiroshima stop due to injury, ‘The Machine’ is making up for lost time and collecting points by the bucketful! He’s already 4th in the rankings and just a few points behind current leader Nick Bruce.

Will Chengdu be the scene of the greatest comeback in FISE history?
Alex Jumelin – at the top of his game
The 40-year-old godfather of BMX proved in Edmonton that age is just a number when he claimed his first 2018 World Series win.

Alex showed us what can be done on a Flatland stage, pulling out a variety of both front and back wheel tricks while demonstrating incredible balance and style.

Only 1,000 points separate him from his mentee Matthias Dandois at the top of the rankings.

You can bet the final battle in Chengdu is going to be epic!

Runner-up at Edmonton and Hiroshima, and currently 2nd overall, the Slovakian has been hugely impressive on the circuit.

Everything rests on how Riso does in Chengdu. Can he up his game to snatch the title from Ikeda Daisuke whose gnarly grinds and legendary McTwists have put him in pole position?

Women’s BMX circuit – youth dominates
In Canada, BMX Freestyle is definitely a young woman’s game!
There were many amazing runs in the Edmonton leg of the UCI BMX Freestyle Park Women’s World Cup, but it was the youngsters who nailed the huge moves.

Hannah Roberts, reigning champion and winner, is only 16.  What’s more, the top 3 riders are all under 21.

If this is anything to go by, the 2020 Tokyo Olympics will be some contest!
Be sure to catch up on the action from FISE World Series Edmonton on our  YouTube channel.
The final stop of this year’s FISE World Series will be in Chengdu, China, 3–5 November 2018.
Related event

The Master of Creativity smashed it again! 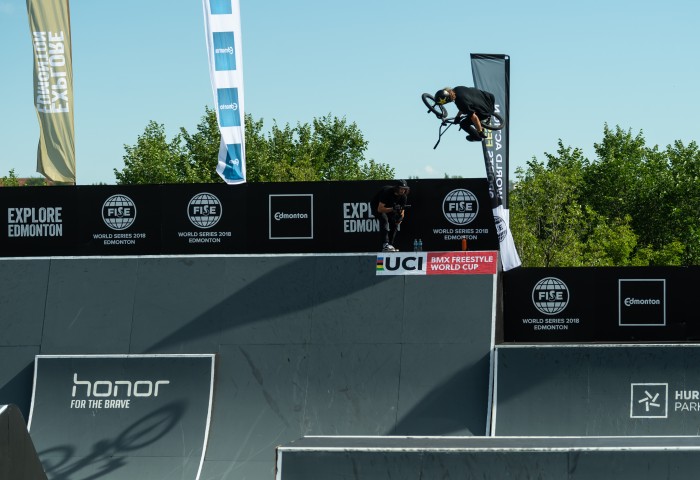